PSA
Ticket Price ¥20.00
In the majority of cases, the carpets on display rarely meet their obligations as a "work of art". Covered in the 'scars' of the machine or handwork, they immediately evoke memories of home and longing for one's ancestors. The double genes of carpets and tapestries – as an object of temptation and resistance – continue to exert an effect whether physical, visual or emotional. Each thread carries a maze of human ideas, full of potential like a spring coiled among the micro-organisms and dust. "Modernism" gave birth to aesthetics of function, while the carpet and tapestry, as a rejection of the floor and their connections to the idea of the wall, let the observer see right through the shell of modern etiquette. The result is a re-examination of 'ornamentation' and its relationship with space. In the textiles from the 6th century to the present day on display, artists and the unknown craftsmen of history provide observers with fertile ground for imagination.
This exhibition - jointly organized with the Musée d'Art Moderne de la Ville de Paris - is relevant in many different contexts. It is not only because there used to be a “Fiber Art Department” at the MAMVP– rugs and tapestries are inextricably linked with the history of Western art in the 20th century–but also because fiber and textile developed in a unique way as a means of great artistic expression in China.
The period from the Middle Ages until the 18th century is known as the golden age of European tapestry, often associated with the court and noble class and with a strong religious element. By the 19th century however, the fast pace of industrialization and urbanization saw all forms of carpets marginalized in favor of mechanical production. It was only when William Morris and others initiated the Arts and Crafts movement that handicrafts regained their status and recognition. At the same time, Persian rugs were a source of inspiration for Morris for new, modern designs, and they also paved the way for a brand-new perspective on "New Art". The medieval Apocalypse tapestry, which is now at the Chateau d’Angers in France, deeply impressed surrealist painter Jean Lurçat, who then initiated the International “New Tapestry Movement”. In 1914, when painter Paul Klee saw carpets made by nomadic tribes from southern Marrakesh for the first time, he was deeply moved by the strong colors and extremely expressive patterns and textures. The textiles with their blend of the primitive and modern were also a great source of inspiration to other abstract and minimalist artists.
Since then, modern architects and contemporary Neo-Craft artists have continued to weave “concepts” into rugs, affording them a character of their own outside mere function. The “sound absorption” quality of rugs together with their nomadic origins also provided another opportunity for experimental sound artists. Part of this exhibition consists of a specially designed "Sound Compilation Project".
As the beginning of the Silk Road, China's long textile tradition stands alongside the weaving history of the west including ancient Egypt and Greece. Shanghai had already become a center of the cotton weaving industry by the Ming dynasty (1368-1644) and was home to China's first generation of textile workers. We have a great reliance on cotton, and a large repository of memories connected to it. Visitors to this exhibition will be able to admire Ming dynasty silk tapestries on loan from the China Silk Museum as well as exquisite Qing dynasty felt rugs from the Uyghur Museum in Xinjiang. These are not just precious objects; the modernity of their patterns and colors are startling.
In Chinathe nomadic groups who inhabit the country's north-west are almostthe only people to have close contact with carpets. In most other regions, the tremendous human and economic cost required to produce carpets has made them a symbol of power and wealth. On display at this exhibition are two large 'Red' carpets produced during the 1960s. Photographers Feng Yan and Li Nan's record of the role played by carpets in political and everyday life will call forth the collective memory of the public.
It was only in the 1980s that carpets and textiles escaped the label of 'traditional crafts' and became part of the modern and contemporary context. The Bulgarian artist Maryn Varbanov, icon of the “New Tapestry Movement” of the 1960s, played a critical role on this process. The Varbanov Tapestry Research Center, which he founded in 1986 at the China Academy of Art, was the first institute devoted to contemporary fiber art in China. On display are several large fiber installations Varbanov created during the 1970s as well as important signature pieces by his students Shi Hui, Zhu Wei, Liang Shaoji and Lu Rulai.
After a series of 'movements', artistic expression returned its focus to the individual and to the mind, in the same way that art developed in the West. Aniwar Mamat, Yin Xiuzhen, Tien-Chuo Chen, Cheng Ran, Hu Xiaoyuan and international artists who have lived in China like Heidi Voet and Thonik have found a freer way to communicate with textiles.
Of course, textiles are inseparable from the body. Four clothes designers are exhibiting their interpretations of patterns, the body, materials and scale. They are: Dame Vivienne Westwood, Maison Martin Margiela, Bless, and Qiu Hao. Towards the end of the exhibition there will also be a pop-up store and we welcome visitors to take home a souvenir of the exhibition.
Decorum: Carpets and Tapestries by Artists takes observers on a magic carpet journey through the different attitudes to ornaments, space, art history and craft history in the West and the East. The etiquette of the tapestry is deconstructed amidst the maze of warp and weft. Rather than an object of ceremony to be added to the ivory tower of art, the Shanghai PSA hopes that carpets can become the vehicle for visitors' imagination on their symbolic journey through decorum, and their search for answers.
(Decorum is one of the events being held to commemorate the establishing of diplomatic relations between France and the PRC). 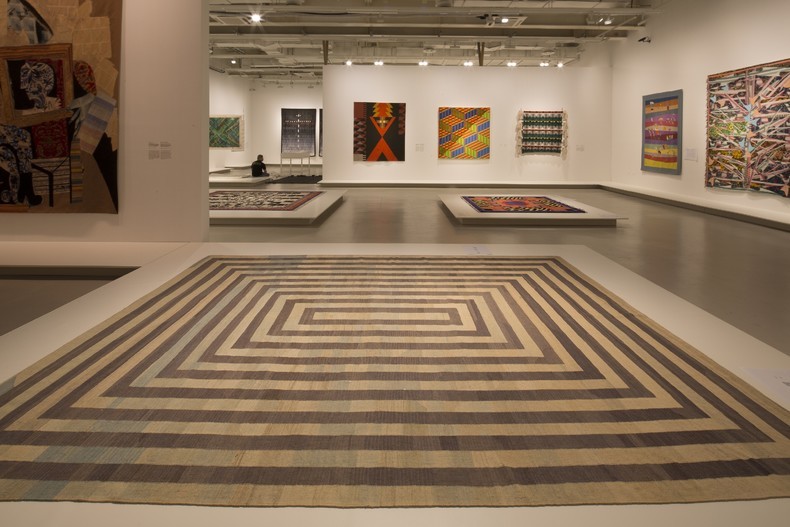 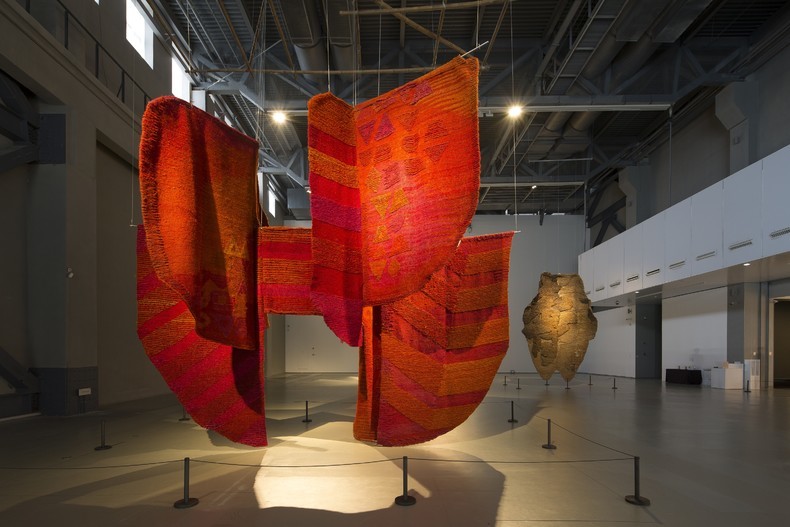 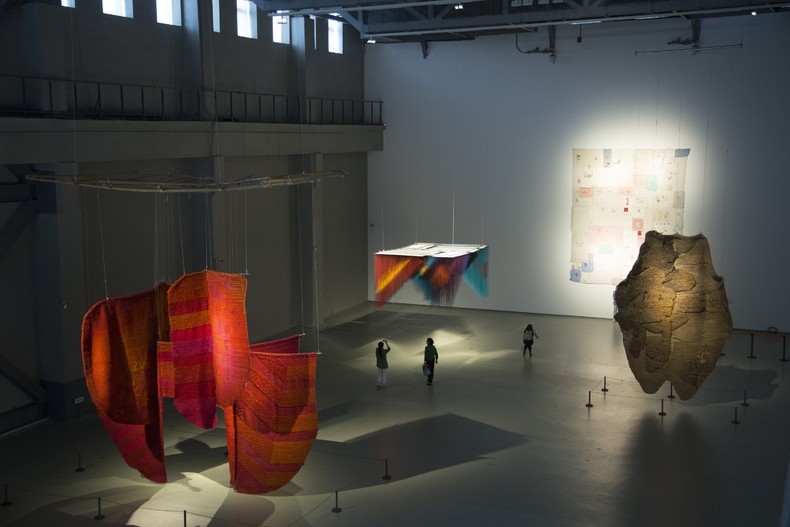 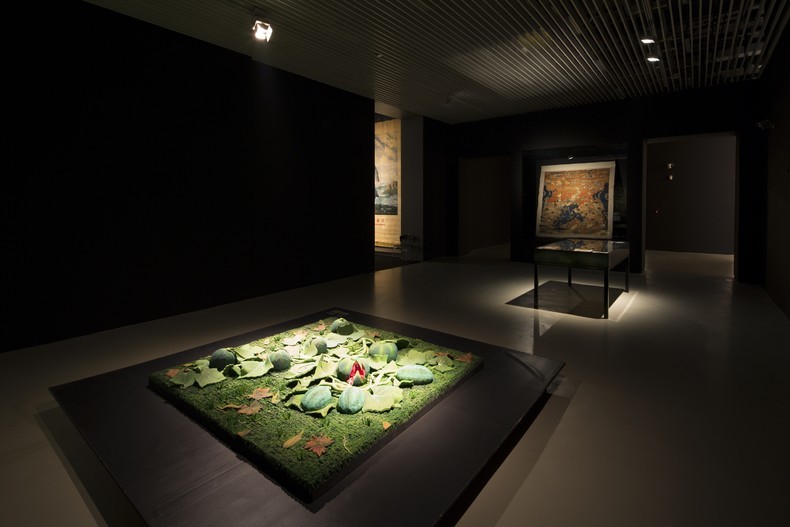 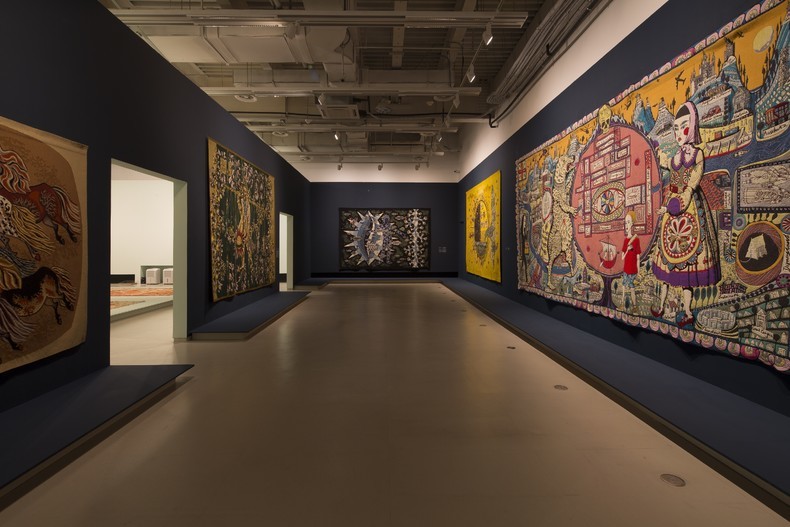 Li Wenying | The Ancient Xinjiang Carpets and the Silk Road 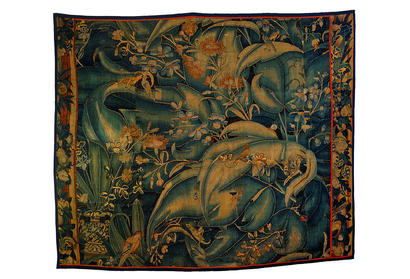 Fragment of green with broadleaves

Carpet of Landscape and Ducks 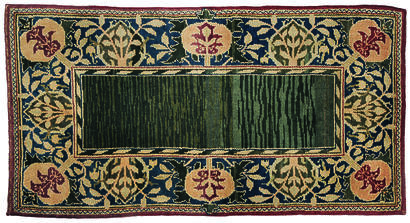 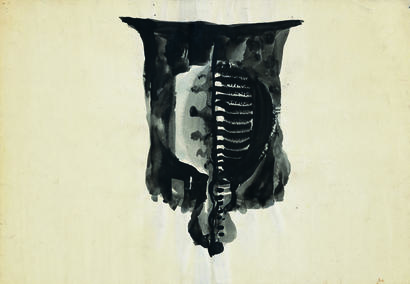 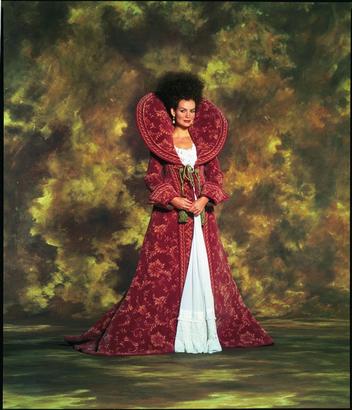 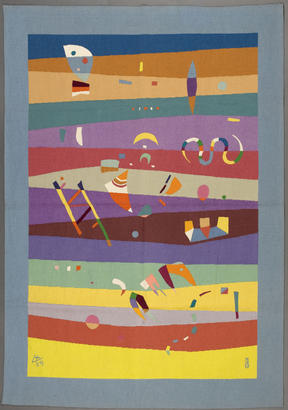 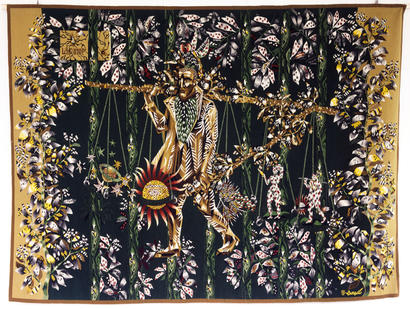 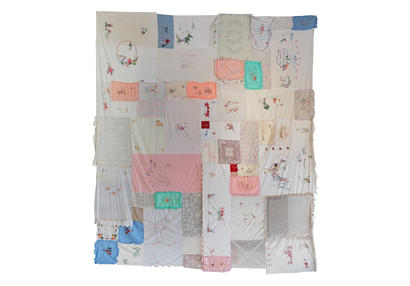 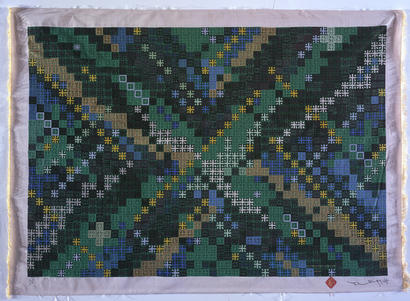 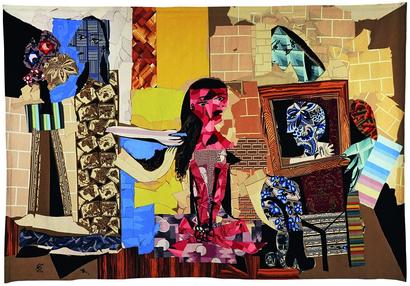 Women at their toilet 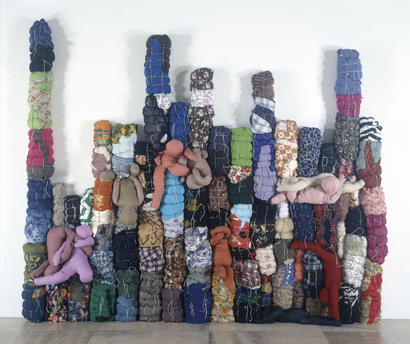 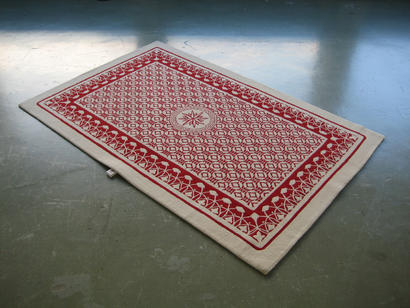 If I Could See But a Day of It (Multiverse) 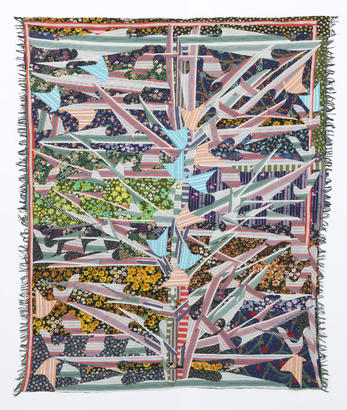 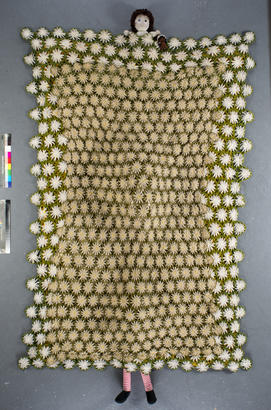 Map of Truths and Beliefs